— The only extant Harrison Sewing Machine patented in 1859. 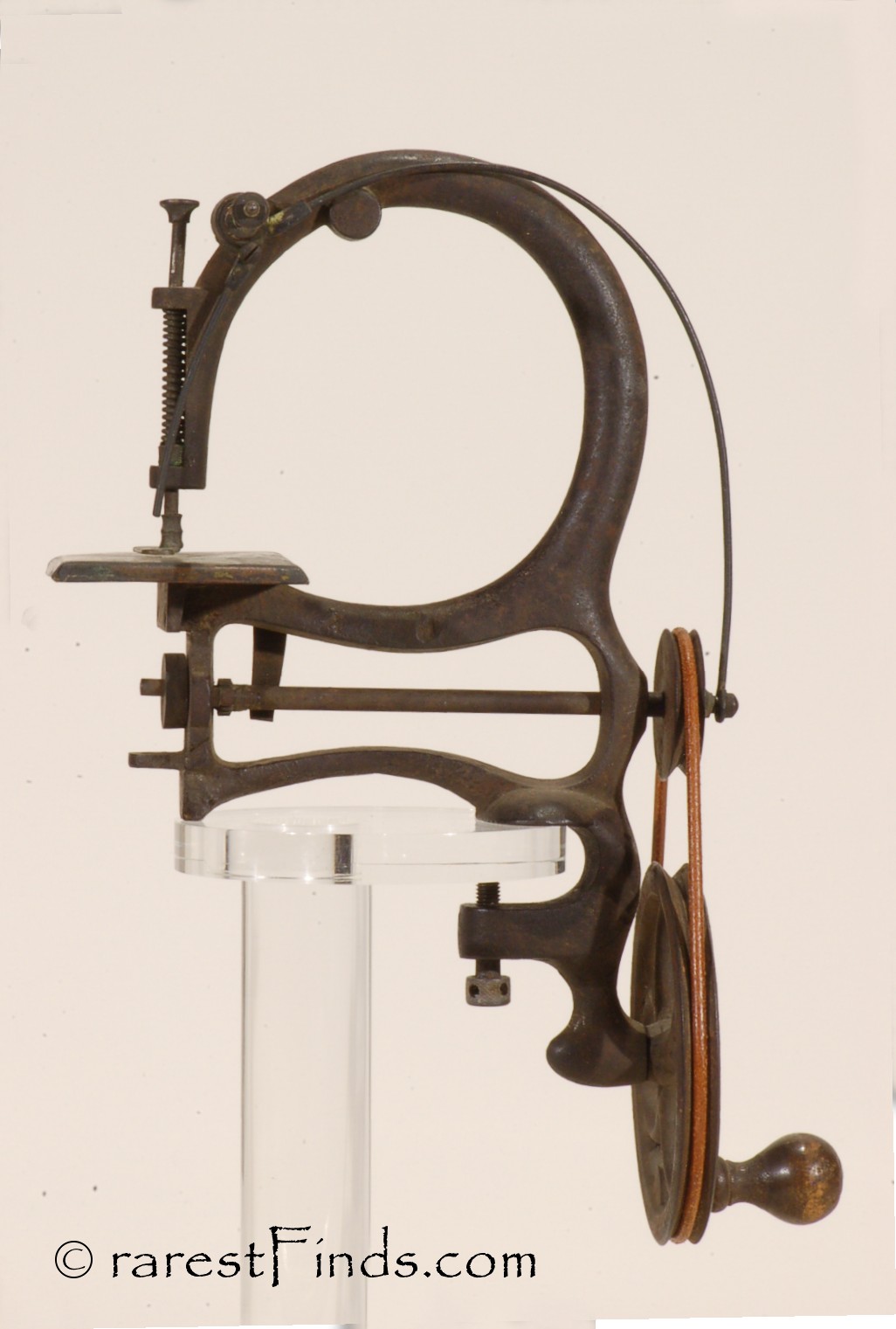 Unbelievable find; the first sewing machine of James Harrison Jr. of New York, NY, ever to be found! Harrison patented his invention on August 9, 1859, and August 30, 1859.
The patents and the patent model in the Smithsonian Institution were the only items know before about James Harrison's invention. Harrison's machine utilizes a barbed or bearded needle which sewed from below the stitch-plate. Unlike the barbed needle on the Boynton sewing machine, the needle on Harrison's machine rotated while moving up and down.
The most ingenious idea Harrision claimed in his patent application for which patent no. 25,013 was issued is a lever operated by the power shaft which is powered by the hand-crank wheel in the back of the machine. This semicircular lever transferres the movement to the front of the machine to direct the thread to the barbed needle. Harrison called this lever “switch-lever”. What ever the reason, his machine was a failure too as the Boynton. However, his machine seems to be further developed than the Boynton sewing machine.
Harrison claimed as his invention in his patent application: “The switching-lever n, constructed and operated, as herein set forth, for directing the thread to the beard or barb of the needle and preventing the escape of the thread therefrom,” read more>>

Earliest Watson sewing machine ever to be found resembling the machine in the drawing of the patent papers to the patent issued to William C. Watson on November 25, 1856. 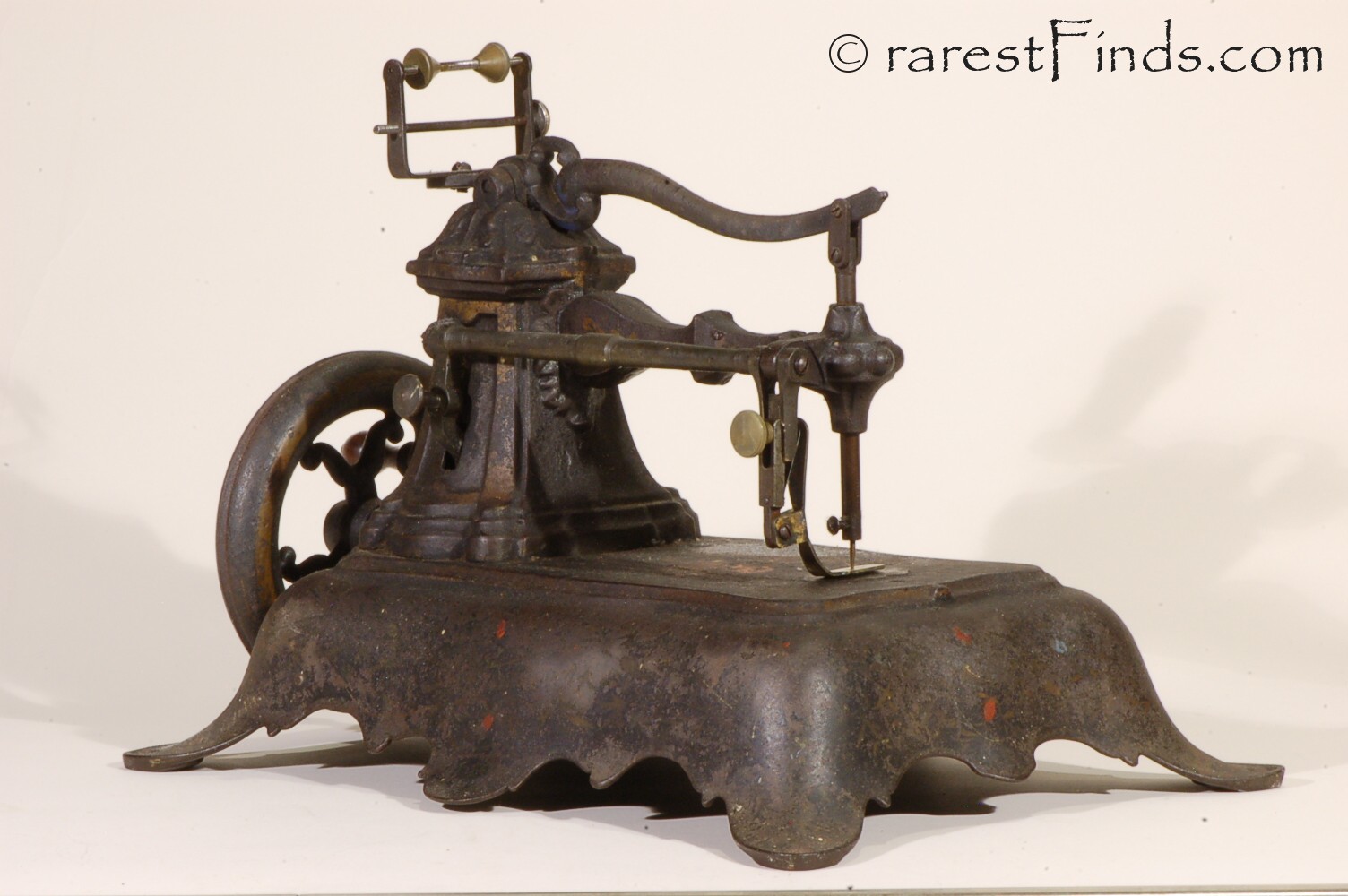 The casting is so delicate that the machine was prone to be destroyed by breaking; especially the arm moving the needle up and down and the hand-crank wheel. The Watson was only manufactured for a very short period of time as the manufacturer, Joel Chase, was sued by Potter and Wheeler for infringment of the A.B.Wilson patent which was re-issued on 22nd January 1856; this is the reason why any Watson machine is hard to find. The machine sold for only $10 and could have been a big success; read more>>

— The only known sewing machine based on Cook´s Patent of 1863. Sold!

Cook´s machine is the failed attempt to manufacture a running stitch machine which does not need the constant interaction with the machine during sewing. William G. Cook claimed in the patent specification, “Its object is to avoid the necessity of stopping the machine and taking out the work when a certain length has been performed, which is so great an objection to other machines of this class, and render continuous the stitching of a piece of cloth of any length.” 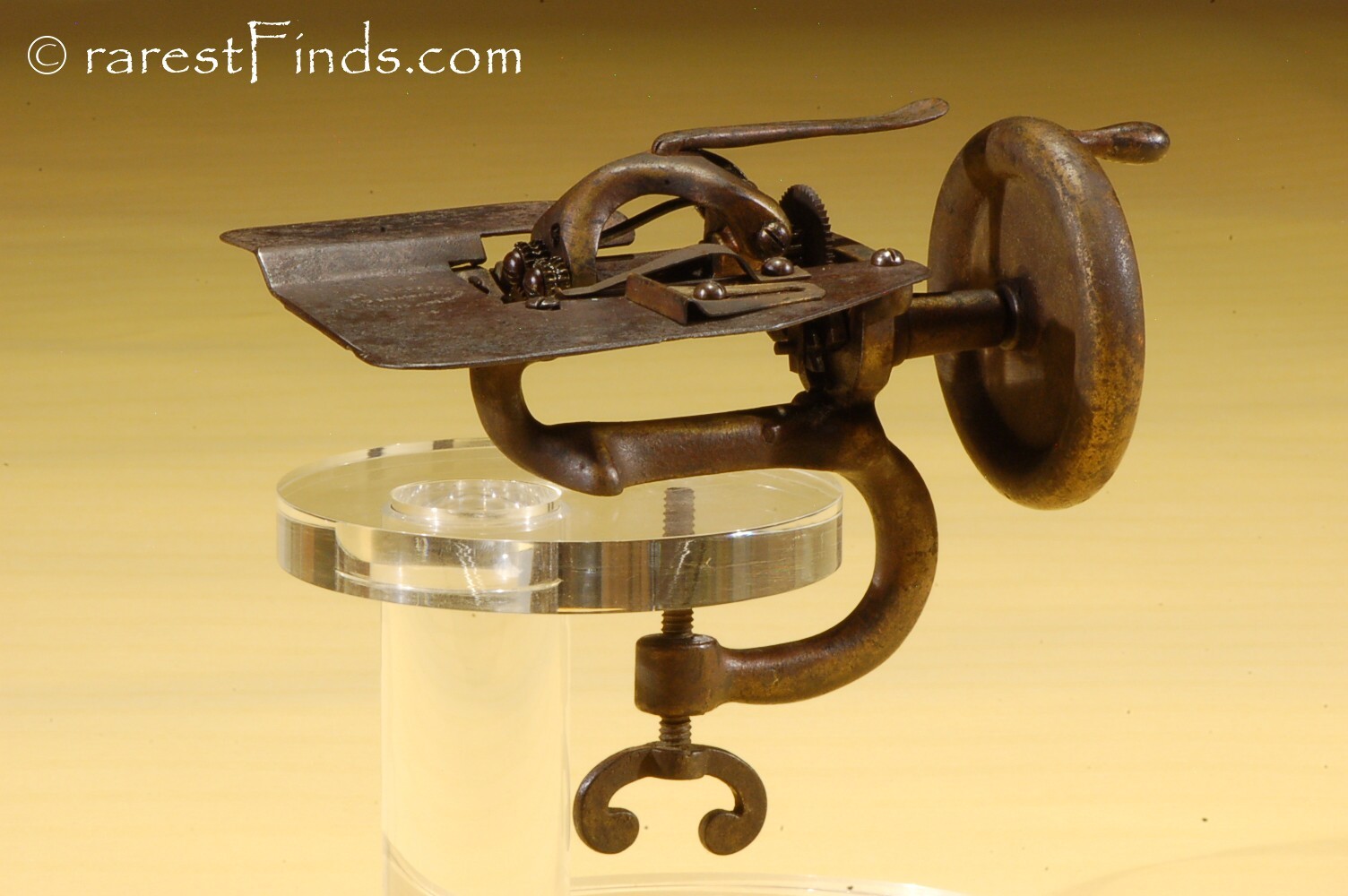 The need to remove the needle from the machine each time the crimping gears had pushed fabric onto the needle to its capacity was the drawback of running-stitch machines. The needle used on running-stitch machines was just an ordinary needle.
Cook´s Patent was an attempt to improve the running stitch machine by eliminating the constant need to remove the needle. Cook devised a complicated mechanism to achieve this. However, his invention created too much friction in its mechanism to render his machine operational.
Cook´s machine was manufactured by the Demorest Manufacturing Company in Williamsport Pennsylvania and sold by, Mme Demorest on 473 Broadway, New York, N.Y.
The machine bears the serial number 85 and is without any doubt the only extant machine of its kind; read more>> 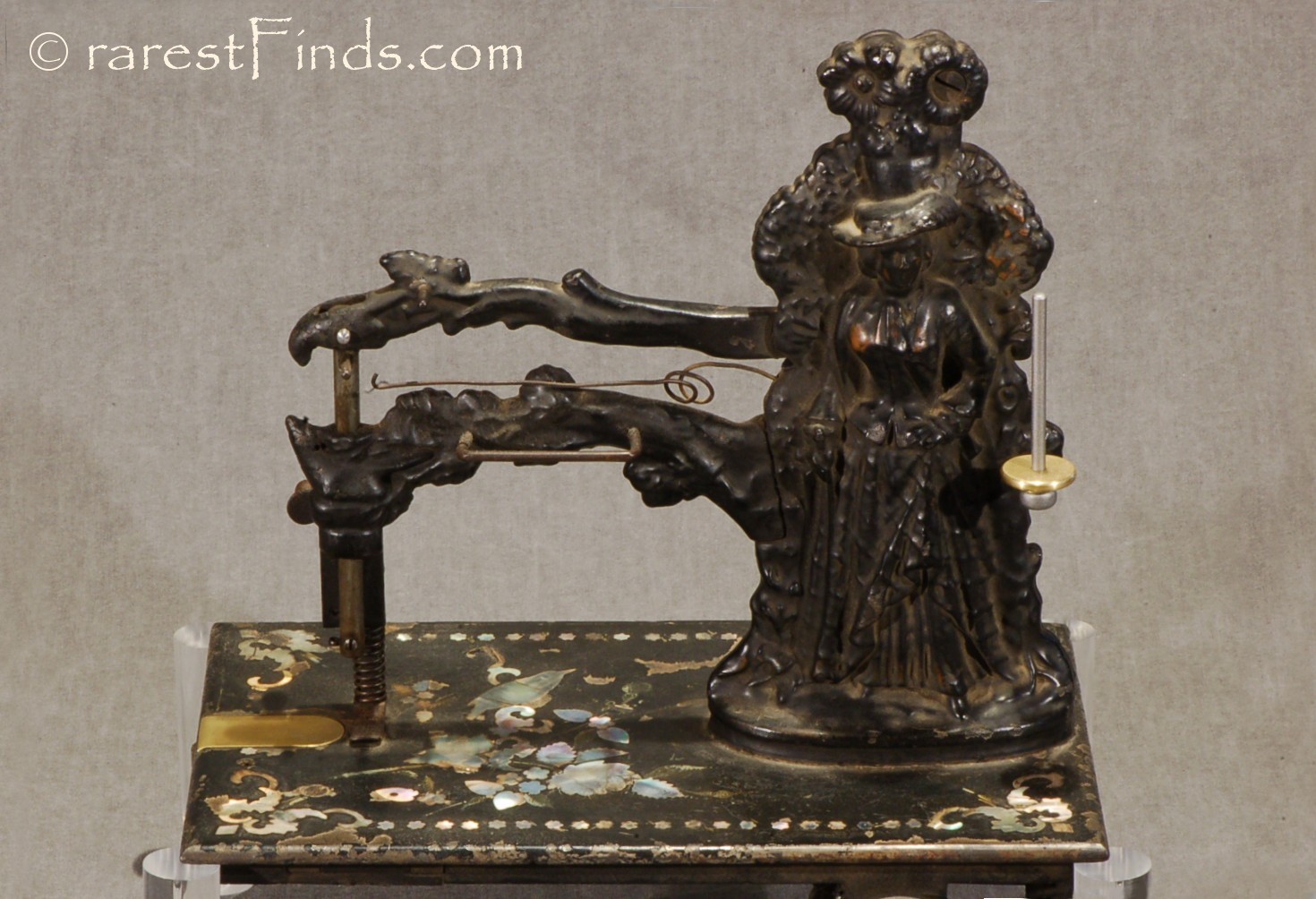 Grace Roger Cooper´s claim that this machine was actually manufactured despite the fact that no machine had ever been found is now confirmed. In her book, former curator of the Textile Division of the Smithsonian Institution in Washington, DC, made this claim based on her observation that two different inventors, independent from each other, used this attractive machine as model for their application for a patent for an improved feeding mechanism.
One of the inventors was George Hensel of New York City for which patent 24,737 was issued on July 12, 1859. Since Hensel´s patent application was for an improvement in the feed, there was no need to put a highly decorative head unless such a machine was commercially available. The patent specifications merely state that the head is “ornamented.”
Sidney Parker of Sing Sing, New York, also used a “Lady” or “Cora Munro” head and was issued patent number 24,780, on the same date as the Hensel patent. Parker´s patent also covered an improved feeding mechanism.
The design of this machine is based on a character in James Fenimore Cooper´s Last of the Mohicans, called “Cora Munro,” read more>>